With its U-verse Wireless Receiver, AT&T has created an entirely new way to watch TV. Having U-verse as the completely Internet based service, AT&T is focused on providing a more innovative and better overall experience than users have with its competitors (Internet based or cable). Viewers are no longer limited to watching their favorite shows on just a single TV or device. Instead, AT&T U-verse is the latest and most flexible way to watch television. Why should viewers be tied to a single television when there are more options available?
The purpose of AT&T U-verse Wireless Receiver is simple. Viewers should be able to watch television virtually anywhere from inside the home without running wires everywhere. The new AT&T U-verse wireless device makes wireless TV viewing from almost anywhere in the home a reality.

The first feature users will notice is the fact there are no wires. Instead of a wired receiver, users now have access to a complete wireless receiver. Customers receive both the AT&T U-verse TV wireless receiver and a wireless access point which is quickly and easily installed in the home.
Now, there is no need to worry about where TV outlets are located. Users can place their receiver almost anywhere. This makes it far easier to find the perfect location for the receiver, especially in already crowded entertainment centers. 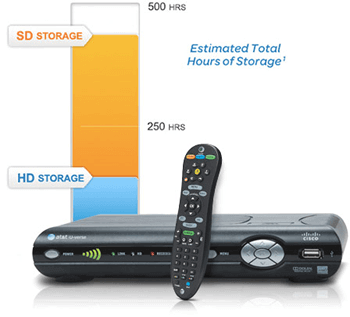 The U-verse wireless receiver contains a wireless signal strength indicator to help users find the location with the best signal for optimal broadcast quality. Finding the right location is vital to getting the best U-verse experience possible. With an easy to read indicator, there is absolutely no guess work. With no wires, it is also easy to move the receiver where ever the signal is best.
The receiver is capable of streaming both HD and standard definition TV content. Viewers never have to choose one or the other. There is also no need to upgrade to a different receiver just to view HD programming.
To make using the receiver as simple as possible, it is designed to work like a standard receiver. The AT&T U-verse TV wireless receiver includes Total Home DVR, Pay-Per-View and U-verse Movies. Viewers also have full access to their favorite features, such as multiviews, applications, channel guides, menus and more. Basically, what users have come to expect from standard receivers is also included with the U-verse receiver.
Installation doesn't take hours like it does with wired receivers. Instead, AT&T made installation a breeze. The installation process is quick and simple. After all, a quick installation means viewers can get back to watching TV instead of agonizing over installation.
A power outlet and a connection to a single TV is required for the device to work. Each household can only have two wireless receivers.

Most rooms do not have an available TV outlet in them. Living rooms and bedrooms are usually the only rooms with access. To place a TV in other rooms or outside, people found themselves having to install new TV outlets, which is extremely time consuming. With the U-verse wireless receiver, this is no longer a problem. There is no need for an outlet anymore. As long as one TV has an outlet, the wireless receiver transmits the signal to other televisions in the home. This is perfect for kitchens and outdoor patios and anywhere else a user wants to have a TV in their own.
In the past, the TV had to be placed close to an outlet. This made arranging furniture a hassle. No longer do people have to base their furniture arrangements around the TV. Instead, the wireless receiver lets users place their TV where it fits best in the room.
Users no longer need multiple receivers. A single receiver covers multiple televisions. This means rooms which aren't commonly used have no need for an extra receiver. This saves the user both time and money.
During special events, wouldn't it be great to have more than one TV in a single room? With an AT&T U-verse TV wireless receiver, this dream is now a reality. The receiver broadcasts the signal to multiple TVs, including those in the same room. This ensures everyone in the room can easily see what is going on without crowding around a single picture.
Another benefit of this receiver is the ability to provide a TV to guests. Many people have no TV in guest rooms or their basement since it is rarely used. When guests arrive, simply move a TV into the room and let the receiver take care of the rest.
Just because the receiver is wireless, it doesn't mean users have to sacrifice the features they have grown to love. The same U-verse TV experience and features are available on all wireless receivers as well. All the user sacrifices are wires and TV outlets.

AT&T U-verse Wireless Receiver is available for $9/month, plus one-time fee of $49. 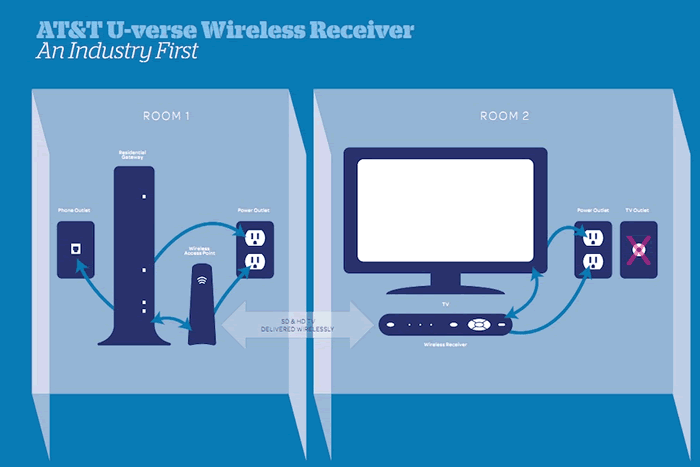 1 Larger Storage DVR: New AT&T U-verse TV customers ordering U300 or U450 will get the larger capacity DVR. With purchase of other plans or existing customer upgrades, larger-capacity DVRs are subject to availability and additional fees.

$80/mo Double Play Bundle Choice
TV + Internet
$80/mo for 24 months. 1-year term for U-verse TV and Internet. Unlimited data allowance included at no charge ($30 value). Save up to $1,284 annually (up to $2,568 in two years) when combine savings for TV, Internet and unlimited data. Plus, for all online orders of TV + Internet bundles, get up to $150 in reward cards and $99.00 Internet Installation Fee waived.